The words of this song, one of the greatest of all time must surely connect with food as the passion for cooking on fire grows throughout the world.

We pondered the origins of fire cooking and in doing some homework on the subject, we found references to cooking about 64,000 years ago when fire played it’s part in cooking but was not the actual ‘cooker’ – stones were! Yes, just as some restaurants today are serving stone-cooked steak, humans heated stones and then cooked meat on the stones.

Fast forward 30,000 years for the ‘earth oven’ in central Europe. These were large pits dug in the ground and lined with hot stones and coals. Food was then wrapped in leaves, placed on the coals and covered with soil. One marvels at the fact that in the South Pacific, people were also developing what we now call a ‘Hungi’. Mammoth bones have been found in and around ancient earth ovens. Imagine the size of the pits! It all sounds a bit like the origin of the Weber BBQ!

Then came cooking over direct flame with meat suspended from the cave roof and, much later, timber frames were made to suspend the meat (think Argentine steakhouses, where flame is king) Humans gradually learnt the art of searing meat, then slow coal or earth oven cooking with the final touch being full flame to finish off the mammoth shank. 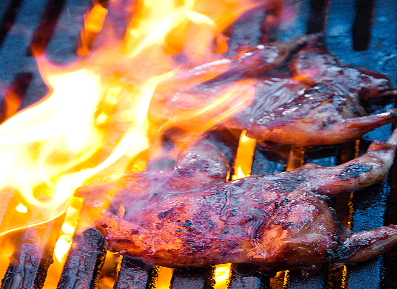 If this all seems a bit hard or if you don’t have a place to cook with fire, consider how you can adapt your BBQ to imitate some of the techniques and outcomes.  We often add some sprigs of rosemary to the gas BBQ grill, to provide a smoky bed for the last few minutes of cooking lamb chops. Alternatively, play around with wood shavings on the BBQ, safely smoking from a small metal bowl on the grill.

Enjoy your next fire cook-up and don’t forget…. Our products are essential, for dishes you’ll find on this website, such as trout stuffed with Chilli Jam and chicken marinated in Thai Chilli sauce.